NEW POLL: DOES YOUR MORNING ROUTINE BRING INTENTION OR IRRITATION?

IN TRYING TIMES, BE GRATEFUL FOR LONG-LASTING FRIENDSHIPS

I have a tiny book on my desk entitled simply ‘Friends.’ I bought it years ago as a gift but found that I just couldn’t part with it. It’s a collection of quotations about friendship—some beautiful, some sentimental, some humorous. Occasionally, when I’m sitting at my desk, I’ll pick up the book and read a few of the quotations. Each in its own way reminds me of how special my friends are—each in their own way. Take Sally, for instance. “There are some friends you know you will have for the rest of your life. You’re welded together by love, trust, respect or loss—or… simple embarrassment.”

In the early 1970s, Sally and I were young, carefree and working in Washington, D.C. One evening—most likely under the influence of the cheap wine we used to drink—we decided we should quit our jobs and go to Europe. Amazingly, when we awoke the next day, we still liked the idea. So we gave notice at our jobs, bought backpacks, hiking boots and youth hostel passes, and made plane reservations for early September.

To make our money go as far as possible, our plan was to hitch-hike, stay in youth hostels and buy food in grocery stores. Europe on $5 a day was our goal. We hitched our first ride with a couple of American soldiers on motorcycles. They were eager to show us the sights—which involved a wine festival on the Mosel. Suffice it to say that the evening did not end well for our soldier friends, who had their drivers’ licenses confiscated by the local police. We vowed to be more discriminating in choosing our rides from then on.

For seven months, we hitchhiked through Europe—north to Scandinavia and south to Turkey. We met some wonderful people—like Nicholas who invited us to stay in his home on the Greek island of Kalymnos for as long as we wanted. And we met some characters—like the two Bulgarian truck drivers who invited us to live with them forever in their truck. Of course, with the language barrier, we couldn’t be sure that’s what they really said! Or the guys in Istanbul who… But those are stories for another day. 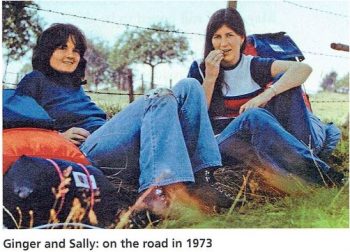 When our money ran out in the spring, Sally returned to Washington, and I settled in Munich. Staying in touch wasn’t easy; it was long before e-mail and cheap phone connections. But we managed. Today we live on opposite coasts of the U.S. And we still rarely get together. But when we do, it’s like we’re—well, you know—old friends. There’s no substitute for a friend who has known you through so many stages of your life—the good, the bad, the exciting and even the boring. A friend who knows what makes you laugh, and who or what has made you cry. It’s the quintessential comfort zone.

A few years ago, Sally and I decided to celebrate our joint birthdays together. We agreed that it didn’t matter where we went. And we also agreed: no youth hostels and no hitch-hiking. We settled on Santa Fe, New Mexico, where we rented a cute little adobe with heated tile floors and multiple fireplaces. We spent a day at a spa, complete with a massage, a facial and a good long soak in the outdoor hot tub. And speaking of spending, I’m sure this one week cost us as much as our seven months in Europe. But it was worth every penny. We took day trips to pueblo ruins, visited countless art galleries and sampled the New Mexican cuisine. But we also spent a lot of time hanging out, talking about past adventures and those yet to come.

“I have learned that to be with friends is enough,” Walt Whitman said. And I would add, we need to do just that every chance we get!