DLE ALUM PURSUES DREAM TO COMPETE IN THE OLYMPICS 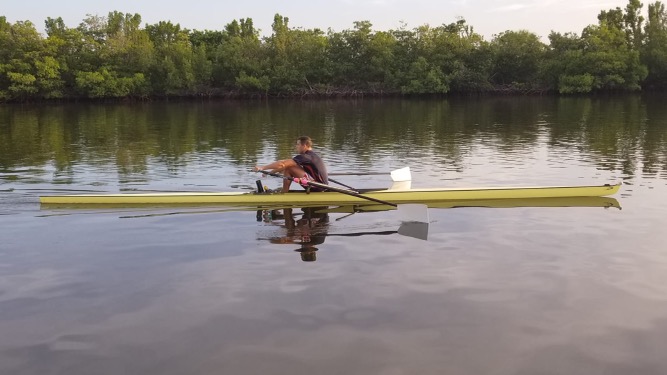 After passing last November his sixth and final licensure exam for opening his architecture design firm, DLE Alum Frank Fuentes decided to lose 20 pounds, train like mad and take a shot at the U.S. Olympic Rowing Trials, underway this week in Sarasota, FL.

Inspired by a longtime goal of one day competing in the Olympics, Frank competed in time trials on Monday (Feb. 22). Emerging victorious from the trials in his single shell would earn Frank the opportunity to race in Switzerland at the final Olympic qualification for the U.S. Rowing Team, and then ultimately to Tokyo for the Summer Olympic Games.

This was far from rowing as usual. COVID protocols were in effect—a first for athletes to adopt. Frank explains, “In order to attend and compete at the event, there were strict rules to follow including: submitting to a COVID test 72 hours before traveling to Sarasota, then taking an on-site test once at the venue, followed by wearing a mask and social distancing at all time unless you’re in the boat when you can remove your mask.”

Another new factor—no spectators at what would have been a crowded event with lots of bell ringing and shouting. The silence was deafening, but Frank notes, “These precautions made for a smooth experience since all athletes took it seriously, knowing that failure to do so could lead to being eliminated.”

Although Frank’s trial time fell short to advance to the heats, his earnings were hefty. “I competed against 26 people. I placed 24th with the top 16 entries advancing to the next stage,” he recalls.

“What I learned from this experience is that I need to stick to a game plan and trust my training. The big takeaway is that no matter how you feel or think you’ll do, just show up.”

Frank returns to his Hollywood, FL home, where he is the president of the Hollywood Rowing Club, to generate his energy to opening his architecture business, Fuentes Architecture.