BREAKFAST CLUB REPLAY: GET YOUR HUSTLE GOING WITH CREATIVITY 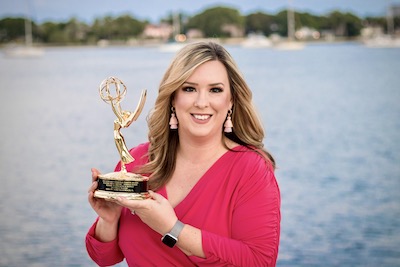 By DLE Alum Danielle Waugh, Investigative Reporter at WPEC, West Palm Beach, FL
The National Academy of Television Arts and Sciences honored me with the Suncoast Regional Emmy Award for Serious Feature Series for an investigation into human trafficking at hotels.

Ahead of Super Bowl LIV in Miami, we explored the role hotel staff plays in stopping sex trafficking on their properties—and how they sometimes look the other way. I interviewed a survivor of child sex trafficking who was abused in Florida hotels. We also went with a private investigator to nearby hotels and motels, where we found the sex trade operating out in the open.

This is my second Emmy award in my two years at CBS12 News in West Palm Beach. I was thrilled to share the news with the DLE Community after the first award, and excited to repeat again now.

The work that I did with my crew was life-changing. Our investigation into sex trafficking was bold and a bit controversial. A day after it aired, I was the subject of a small but angry Twitter mob accusing me of being a bad person and a terrible journalist because of the way we went into local hotels and questioned people there.

I was so upset that I turned off notifications on my phone and cried in my boss’s office the following Monday. I had to talk to our station’s security consultant about my safety. It was totally crazy, and it made me doubt myself and my work for a little bit. We submitted this series for an Emmy, not very confident it would win because, after the social media reaction, it felt like a polarizing piece.

But it turns out my news director was right—it was a strong story that we should be proud of. Important investigations don’t usually win you friends. But sometimes they win you Emmys.

Through this adversity I learned how to tune out the noise. Recognize that social media can be a great a tool—but it can also distort reality. When times are tough, trust your gut and listen to the opinions of the people who matter: your friends and family, your colleagues and managers, and your industry experts. The keyboard warriors may sometimes seem like the loudest voices, but they aren’t necessarily right.