CREATIVITY WITH A PURPOSE: ALEX REGEN 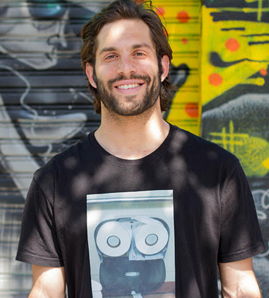 Starting his career in advertisement sales before creating his own visual arts education community, Alex Regen is all about creativity with a purpose.

“Take your ideas seriously.” That is a lesson Alex learned early in his career, and it is that lesson that inspired him to turn his photography hobby into something more. He used to take pictures of everyday items that seemed to have faces hidden in their design. After writing an art book based on these photographs, Alex was introduced to an after-school program in San Francisco. He initially got involved by giving a percentage of hias art sales to the program. Over the next two years, he built a curriculum to inspire and help the kids. “Having a mission, or a why, helps to galvanize yourself and other people,” says Alex.

In a career spanning more than a decade, Alex has worked in multiple industries and positions. He graduated from Syracuse University in 2008 with a major in Information Management & Technology. His first job was at Minyanville Media, where he cut his teeth in ad sales and weathered the storm that was the 2008-09 financial crisis. From there, Alex moved up the ranks by working as a Senior Account Executive at Selectable Media and Head of Sales at Tribe Socks. After spending many years on the West Coast, Alex is now back in New York. “I moved back to New York to be around more inspired energy. I wanted to be closer to my family who all live in NYC, especially my two nieces.”

He credits a workshop at the 2008 DLE Annual Retreat for normalizing that kind of career path. Alex says, “It doesn’t have to be a straight line. Ultimately, the more zigzags you take, the more interesting the journey becomes.” To this day, Alex is still in touch with DLE Alumni he met 12 years ago. “It’s a family. It’s there for you,“ he says.

Alex is no stranger to going outside his comfort zone, from switching industries to starting up his own business. He advises anyone wanting to do this to take risks. “Getting outside your comfort zone is a muscle that grows with practice. The key letters in practice are act.”

Outside of work, you can find Alex taking pictures or rollerblading through the streets of New York. Thanks to Alex Regen for taking the time to speak with the DLE.