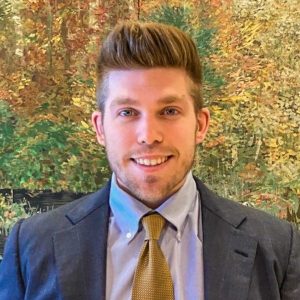 You’ve likely heard of the ‘light bulb moment.’ That eureka moment when you think of an illuminating new idea for a product or project. Have you ever thought about making that idea a reality? Boston-based DLE leader Jonathan Katz did.

A familiar face and voice as a DLE Breakfast Club moderator, Jon grew an idea into a consumer product called BLENDi. His entrepreneurial drive evolved through three key steps, which he outlines here.

Jon’s invention development started in 2016 when he was a sophomore at Springfield College. He identified a problem that he was experiencing every day as an avid gym goer. “I ran into a consistent issue when making my post-workout protein shake. The shaker bottles were falling flat,” he recalls. “Which got me asking, why can’t I replicate my at-home blending experience in the convenience of my water bottle?”

Jon realized that he could be the one to solve the problem. “You need to trust yourself because most likely nobody else will,” he admits.

This first step is crucial to the entire journey. Most invention ideas never go beyond. Jon emphasizes that most people lack the correct mindset when it comes to being an entrepreneur. “You should be a dreamer and almost naive in a sense. You can’t be too realistic.”

Having an idea is necessary, but implementing that idea is crucial. Jon took his general idea and immediately sketched his product out by creating several prototypes to get an idea of how the product would look and operate.

Along the way, Jon temporarily moved to Los Angeles to intern for Genexa, a pharmaceutical marketing company, where he learned business operations by assisting the CEO and President in day-to-day tasks. “I took the knowledge I gained from this experience and implemented it into my own manufacturing process for BLENDi.”

His experience led him to source a manufacturer and produce 300 prototype units. Jon recalls, “The timeline stretched from April 2016, when I first developed the idea, through August 2018, when there was a final product.”

In the entrepreneurial journey, risk rises as a reality. “Risk is uncomfortable. It is inevitable. And it is a constant factor,” he notes. “Just recently, I took a massive risk at the end of last year, and I bet my entire business bank account on a new production line of BLENDis.”

The risks have delivered results. After experiencing a net loss last year, he anticipates a sizable net gain in 2022. “Entrepreneurs must be able to accurately recognize and manage risks. If you can really trust yourself when taking risks, you will be fine,” he affirms.

After almost four years powering BLENDi, Jon takes pride in being the sole force behind his company’s growth and success. “I never used outside funding or venture capital,” he beams. “I didn’t want to be controlled or owe anything to others.”

Looking ahead, Jon hopes to pursue new avenues for BLENDi. Recently, he introduced an innovative version, BLENDi Pro+. Through its convenient size and the new blade cover, BLENDi Pro+ is even more portable and safe.

He anticipates more product developments, such as travel-size blenders. Additionally, this year he has decided to, for the first time, put a portion of his budget into paid promotional opportunities, such as a TikTok platform.

The DLE has been one of Jon’s most vital resources throughout this entrepreneurial journey. “The DLE helps me innovate and connect with others by giving me the community to reach out to and seek advice from regarding how I can expand my business and how to do it,” he stated.