SKILLS-BUILDING PROGRAMS FIRMED UP FOR MAY

IS CULTURE A MAJOR ATTRACTION FOR YOU? TAKE THE NEW 10-SECOND POLL

Although I missed the original Woodstock concert, I visited the museum a few years ago. It’s in a tiny town called Bethel Woods, the actual site of the concert. The museum not only provides a wealth of information about the event itself—including why it was called Woodstock even though it wasn’t held there—but also puts it in context. Exhibits explain what was happening in the decade leading up to the concert as well as how the organizers put the whole thing together on a shoestring and within an extremely tight timeframe. Film clips show attendees reminiscing about their experience. I was amazed at how much they remember.

On a hot August weekend in 1969, young people from around the country rolled into the small town of Bethel Woods in rural New York for the Woodstock music festival. Organizers originally expected 50,000 – 100,000 people, which still would have been a pretty big crowd for a field in the middle of nowhere. But it seems like nobody wanted to miss this party.

Estimates are that more than 400,000 came, creating massive gridlock, not to mention a shortage of food and drink. Porta-potties, parking and medical services were also in short supply. And then there were the logistics of getting the more than 30 bands and their equipment in and out of the area with clogged roads.

Although it could have been a complete disaster, it wasn’t. People worked together—organizers, attendees, vendors and even some of the townspeople—handing out food and water, helping those with medical issues and trying to maintain an atmosphere of peace and love. Even the military stepped in to help, providing helicopters for the performers as well as for medical emergencies. 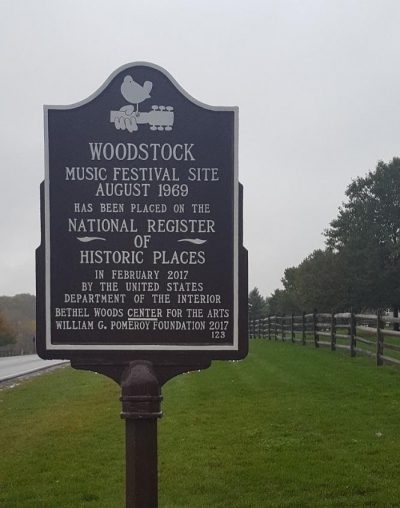 The Woodstock organizers faced many hurdles—like when the town of Wallkill, the original festival venue, pulled the plug just a month before the event. Scurrying to find a new site, organizer Michael Lang came upon Max Yasgur, a conservative dairy farmer in Bethel, who offered the use of his farm. His neighbors protested vehemently—and not always civilly.

But Max held firm, and the kids poured in. During the concert, Max was asked to say a few words to the crowd. “You have proven something to the world,” he said, “…that half a million kids can get together for fun and music and have nothing but fun and music.”

Here’s some of the fun music trivia I learned at the museum. The highest paid performer was Jimi Hendrix, who earned $18,000. Bob Dylan lived in nearby Woodstock, but declined to appear. It was just the second concert appearance for Crosby, Stills, Nash and Young. Carlos Santana, a complete unknown at the time, thrilled the crowds.

Richie Havens, who was scheduled as the fifth act, became the opening act when the other bands got stuck in traffic. He remained onstage for three hours, performing encore after encore as he waited for other bands to show up. And when he ran out of songs, he improvised the song Freedom, which became an anthem of Woodstock. There are so many more stories from the bands, attendees and organizers. And the museum is a great place to experience them. It’s almost like being there.