CONTRIBUTING FROM THE HEART: DLE MEMBERS MAKE A DIFFERENCE

ARE YOU LIKEABLE? CALIBRATE YOURSELF AT THE APRIL CULTURE CHAT 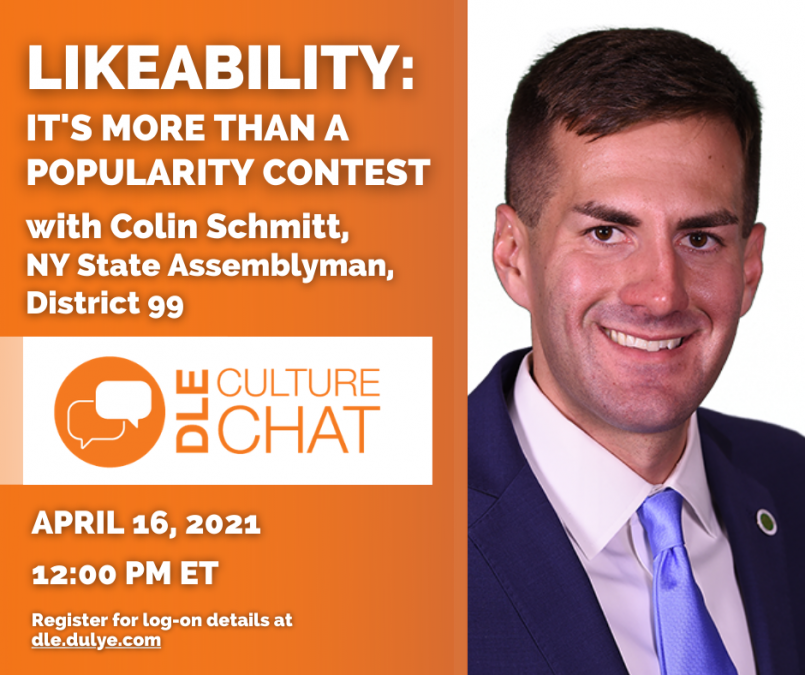 One of New York State’s youngest elected officials tackles the topic of likeability as the guest speaker at the April 16 Culture Chat. Colin Schmitt, New York State Assemblyman from the 99th district, gives his gritty advice for earning others’ support, gained from launching his political career as a teenager. The conversation starts at noon ET. Reserve your seat by registering here for “Likeability: It’s More Than a Popularity Contest.”

Inspired by DLE community members’ feedback, the topic of likeability is readily tied to career success. This interactive session–which will feature a conversation with Colin plus breakout discussions–will spark self-reflection about how you connect with others and factors that influence likeability.

Colin will share some of his strategies for building connections that he has been developing since becoming politically active in high school. At that time, he became the youngest aide hired by the New York State Assembly. During his college years, Colin founded and chaired a nonpartisan government reform political action committee (New Dawn NY) that promoted ethics reform, budget reform and job creation. Through New Dawn NY, Colin successfully created the grassroots “Stop NY Double Dip” campaign that garnered national media attention.

Colin was elected to the New York State Assembly in 2018 and re-elected in 2020 to represent parts of Orange and Rockland counties. He currently is the Ranking Minority Member of the Assembly Committee on Local Government and has been selected to serve on the Housing, Labor, and Insurance committees. Schmitt also serves as Co-Chair of the bipartisan and bicameral Sportsmen’s Legislative Caucus.

He serves as a Sergeant in the Army National Guard. He completed Army Basic Combat Training at Fort Benning, GA, and finished as distinguished honor graduate from Fort Lee, NJ, as a 92A automated logistics supply specialist. He also completed the Fort Dix, NJ, NCO Academy Basic Leaders Course. He is currently assigned to the 1569th Transportation Company in New Windsor, NY, Army National Guard.

He is a graduate of The Catholic University of America, where he earned a bachelor’s degree in Politics with a minor in Theology and Religious Studies.

Prior to his election to the Assembly, Colin served as Chief of Staff for the Town of New Windsor in the lower Hudson Valley. He is also a licensed commercial real estate agent with his wife, Nikki, who is broker of their third-generation family business.