CAREER TRANSITIONS: HOW I LANDED A NEW JOB TO START THE NEW YEAR 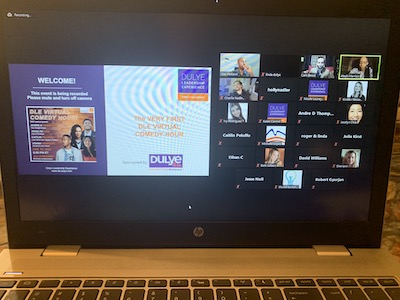 It was hysterical. It was also HISTORIC!

The Dulye Leadership Experience (DLE)’s FIRST EVER Virtual Comedy Hour was a true trailblazer on Jan. 15, breaking new ground as the first live virtual comedy show featuring Deepfake technology, which enables celebrities to seem to appear at the event.

“My favorite part of the evening was watching the hilarious comedians laugh with the audience at our digital hosts,” admits Charlie Nadler, who partnered with the DLE in producing the special event.

The main attraction of the laugh-laced event was a four-star collection of comedians who have culled nationwide fans from appearances with Jimmy Fallon, Stephen Colbert and the America’s Got Talent cast. With their smart, sassy and versatile repertoire tailored for a family audience, Usama Siddiquee, Caitlin Peluffo, Jocelyn Chia and Andre D. Thompson entertained the virtual audience of DLE members from across the country and many newcomers.

In addition to the Deepfake surprise guests, the evening featured a live question-and-answer session with the comedians after they had completed their comedy sets. Questions pertained to their own personal career pivots after COVID sacked the live performance clubs and venues that had formerly fueled career opportunities and successes.

During a live interactive chat that engaged the attendees and the comedians, attendee Ethan C. summed up, “We laughed out LOUD the entire hour. It’s been so long since we’ve laughed like that. Stand-up comedy is pure medicine, and the virtual forum doesn’t dissipate the fun!” He added, “If we can get more great comedy like we experienced tonight, I’m good staying quarantined longer.”

The chant for more was echoed by the enthusiastic crowd and will be actively considered by the DLE Programming Committee, which is responsible for planning 2021 special events.

“I can’t remember a time during this past year where I’ve laughed for over an hour straight,” says Charlie. “It was really exciting to implement our new technology with such a talented lineup and appreciative audience.”

He adds, “More importantly, thanks to the support of the DLE and their ticket sales, we were able to provide valuable work for these comedians during a tough chapter for live events.”