PULL OUT YOUR FLANNELS AND TUNE INTO JESSE’S PLAYLIST 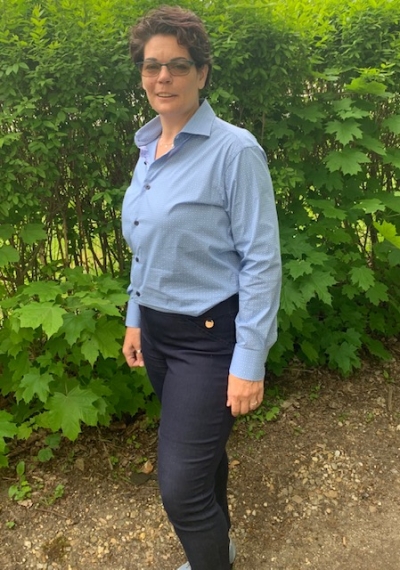 2020 has been a year of firsts for me: Graduating college, starting a corporate job, homeschooling my two children, losing more than 40 pounds from eating healthy and exercising, and buying a house. So, why not raise the bar even higher and tackle racing in a triathlon!

Earlier this year, I bought two recreational kayaks because I love being on the water. I live in the Berkshires, which has plenty of lakes surrounded by the most beautiful mountain landscapes that I am consistently in awe of. I started leisurely kayaking several times a week.

Shortly after starting my new job in May, I found out that one of my colleagues was an avid biker who talked enthusiastically about an annual competition that he had competed in over the years.

It was the Josh Billings—a rather famous and established race—and coincidentally, my new company, Cross Insurance, has insured the race for many years. However, due to the pandemic, 2020 was going to be different as the Josh was going virtual!

So, something started brewing in my head. I thought if I could pull together a team, I could possibly participate in this triathlon. I would kayak. I had a work colleague who would bike, and we would find a third teammate. I posted on Facebook looking for a runner. In a short time, she stepped up. We had a team!

With a month to complete our virtual race and log in times, I thought I had plenty of time to practice. I took a leisurely run at a nearby lake called Stockbridge Bowl to practice for my 5-mile paddle. The Bowl, incidentally, is the actual race lake so I thought it would be beneficial to practice there.

But then, things got busy. My job, the kids, new homeownership–time flew by. Before long, it was Sept. 10th and my team met up to review what we needed to do. It was then that I realized the last day to record our virtual times was three days away. I hadn’t kayaked in a month.

I wasn’t going to let my team down though, so I planned everything for my race day. I arrived at Stockbridge Bowl at 1 pm. The boat ramp attendant said I was the first person that day to log in for the Josh, so no matter what, I was going to win. I really loved that perspective.

I headed out in my kayak. The wind was blowing something fierce. I immediately thought, I’m never going to finish this race if I’m going against a 13-mph wind, but I’m going to try to see how far I get! The bow was hitting the tops of the waves with such force that water was dancing into the kayak soaking me to the bone.

The finish line seemed so far away, and I really was thinking about stopping. My shoulders and lungs were burning. But I kept going, telling myself that I could do this.

I caught a second wind, the adrenaline kicked in, and I wasn’t even feeling any pain. I just kept going. Not any faster, just at a steady pace, I kept close to the shore and rounded at the other side of the lake. I was able to catch my breath, but I knew the worst was yet to come. The last three-quarters of a mile forced me to head, once again, into the wind.

At exactly five miles, my kayak coasted into the boat ramp. I clocked in at 1 hour and 13 minutes. I didn’t even know if this was a time to be proud of or not. I never checked the results from the previous year.

The boat ramp attendant saw me and immediately said “You won! Congratulations.” In fact, I did feel like a winner. I was not the fastest or the fittest. I didn’t even have the best kayak, but I made it. This was my first triathlon and the first time I had competed in a sport since grade school.

The next day I could hardly move my shoulders. Ihad a bruise on my shoulder and a monster blister on my palm. However, those things would heal. That feeling of victory would remain with me for years.

This was a powerful growth experience—one with many takeaways to share:

• Even if it seems impossible, do it anyway.

• It’s ok to not get first place, there’s always next year.

• Always keep your word, to yourself and to others.

• Bring a Camelback for water; it’s definitely too hard to drink out of a bottle while you’re kayaking and not lose steam.

Hopefully, my story inspires you to challenge yourself physically. I learned that even a complete novice can complete a race and feel good about it. Go on and get out there —you have nothing to lose and everything to gain.