DLE Ownership Workshop: How to Brand Yourself in a Virtual World

DLE Breakfast Club: Running on Empty? Get a Goal Reboot!

What is your fear level in terms of public speaking? For most of us, it is high. Really high. The National Institute of Mental Health reports that public speaking anxiety affects about 73% of the population. There is even a name for it: glossophobia.

Ana Bahrani, Vice President of Membership, and Saksham Manchanda, Vice President of Education, both from the Talking Toasters Club of Toastmasters International, will help you “Nix the Verbal Tics and Become a Better Public Speaker” at the April 28th Workshop, starting at 5:15 pm ET.

This workshop will be customized to address attendees’ speaking challenges. When registering in advance, attendees can indicate a phobia they want to overcome. Feedback will be shared with Ana and Saksham, who will discuss ways to improve during the 60-minute, interactive program.

Learn tips for calming nerves and silencing verbal tics—like “ummm” and “you know”—that you can apply every day, while harnessing new methods to control your breathing and smooth your pace.

Tickets are priced at $5 for DLE community members and $10 for non-members. 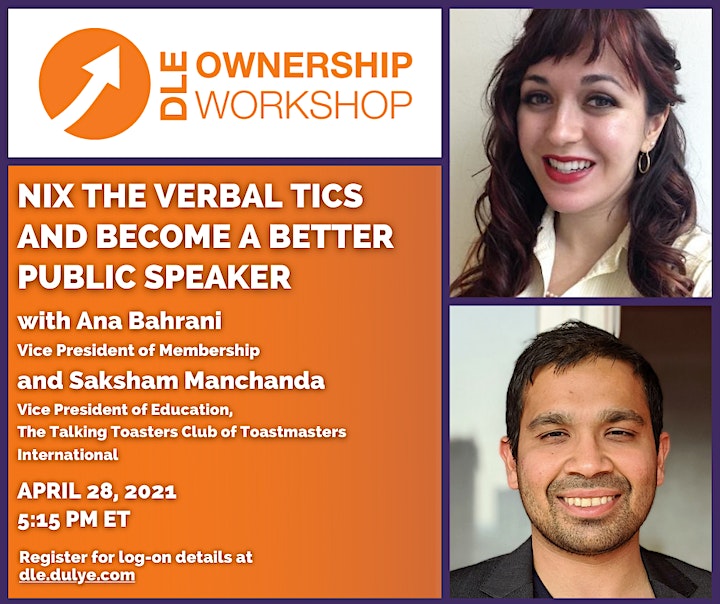 About Ana and Saksham
Both Ana and Saksham have extensive experience serving in leadership roles of the Fort Collins, CO-based Talking Toasters Club.
Ana is a graduate of several public speaking programs, including the Robert Maxwell Maximum Achievement program. She is active in the DLE as a member of the Business Development Committee. A Colorado native, Ana now lives in Cape Cod, MA and works for Neenan Archistruction, an architectural design-build firm specializing in public- and state-funded education projects, as well as mixed-use residential, office, medical, renovation, historic and spiritual building. She earned a bachelor’s of architecture degree from Syracuse University, where she also completed study abroad programs in Italy and Greece.
Saksham, who lives in Fort Collins, CO, is a mathematician and engineer by training. He had no experience in public speaking—until grad school, when he was put in front of a class of 120 students four times a week. Since then, he has been an active member and officer of The Talking Toasters Toastmasters Club. He has competed in numerous public speaking contests and serves as the organization’s Vice President of Education, where he ensures that all members are on a path of constant improvement as speakers, presenters and leaders.
Saksham works as a senior software developer for Secure64 Software Corporation. He received his bachelor’s degree in math and computer science from the National Institute of Technology in Durgapur, India, and earned his master’s degree in computer science from Colorado State University.